The Tenth Circle by Jodi Picoult 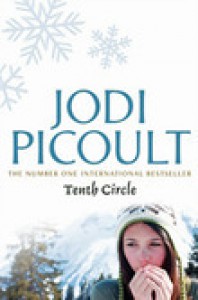 In The Tenth Circle, Jodi Picoult deals with another universally topical issue - rape, focusing the story around 14-year-old Trixie Stone, whom her ex-boyfriend rapes at a party, and the Stones' struggle with the aftermath of it.

Now, the book starts a little on the slow side, which prompted me to do what I do very rarely: I skipped a few chapters and read a little ahead, and what I read made me so angry I almost didn't finish the book. SPOILER ahead.

At some point it seems as if Trixie lied about being raped and it made me furious that Picoult would perpetuate such an awful stereotype: that women lie about it out of spite or vengeance of shame of whatever, because this is the very thing why rape survivors are afraid of coming forward and reporting it and why, even when they do, so few rapist are actually convicted and/or spend time in jail.

However, I refused to believe Picoult would go for such a low move, so I went back and read the whole thing and I am glad I did, for The Tenth Circle offers a great insight into working of rape culture we live with, where rape survivors' every word and action get questioned while the perpetrators are protected by the innocent-until-proved-guilty principle.

In Trixie's case, the matter of consent is especially glaring, since she was raped while intoxicated and drugged, and it speaks volumes about male entitlement that her rapist and the majority of people who witnessed her behaviour prior to rape, never realise that impaired judgement means inability to give consent. Disgustingly, they argue just the opposite: that due to her impaired judgement she was unable to refuse consent. And that sort of attitude is very much prevalent in the world, which is truly horrifying.

Along Trixie's struggle with what happened, we also follow her father, a comic book artist, who is making every effort to help and protect her, while plagued by the memories of his origins, both beautifully interwoven with the making of his newest project, and her mother, a university professor, facing the repercussions of her infidelity and revealing the caused that led to it, mixed with her reflections upon Dante's Inferno.

Thus, The Tenth Circle tells a compelling and emotional story that gives the reader plenty of food for thought.