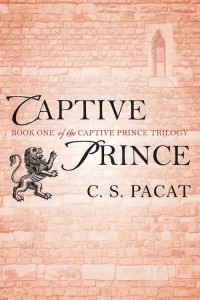 Note: The book reviewed contains themes only appropriate for those over the age of 18.

Controversy, criticism, and calls for censorship (!) are a sure-fire way to make me read something so I can form my own opinion. I heard of Captive Prince a while back from a friend who thought it would be to my liking, but I forgot about it until I stumbled upon some heated debate over it on tumblr, and then I had to read it.

And am I glad I did!

So, Captive Prince tells a captivating (pun intended) story about Damen, the prince and heir to the throne of Akielos, whose bastard brother usurps his place, makes him a slave, and sends him as a gift to the prince of the enemy kingdom of Vere.

I loved the stunning setting of the story, something akin to Ancient Greece meets early Renaissance France (but with extra debauchery), both cultures thinking of the other as barbaric, and yet not so different at all, despite some striking contrasts.

Slavery is a quintessential part of the world in the story and the theme that provokes the most controversy. We can all agree that slavery is an abominable concept, and as such, C. S. Pacat does a great job to present it as it is, unglorified and cruel, in particularly in Vere.

In Vere, being a slave is shameful; a slave is an object for other’s enjoyment, subjected to all kinds of mistreatment, beatings, rape. Lack of communication or miscommunication as a plot device normally irks me, but I liked how Pacat brilliantly uses it to make a point: a slave’s word in Vere is less than nothing, not even worth asking for (for the most part.)

In addition to the above, the detailed world-building of both cultures is fascinating in many other aspects, but I will leave it at that as to not spoil everything and move on.

Next, the characters are incredibly fleshed out, especially the main protagonists, both of whom I came to love by the end of the book (yes, Laurent, too.) The set-up for their story includes all of my favourite tropes: enemies to lovers (well, not yet), opposites attract, the hero and the (not really) villain.

If you are looking for romance, you will find very little of it in Captive Prince, least of all between the main protagonists, because this story is really a build-up to it. Nevertheless, you won’t be bored at all, for there is enough political and social intrigue, power-plays, engrossing interactions, and more to keep you in thrall to the last page.

All in all, I liked Captive Prince very much and I think that is all I can say as I wrap this up. Now, excuse me, I am in a hurry to start the second book in the trilogy.